Honey Fraud – The truth about honey

This was the first winter meeting of East Devon Beekeepers to be held face-to-face since Covid restrictions started way back in 2020. We are particularly fortunate to have Lynne back again to tell us about this worrying trend in honey adulteration and honey fraud.

The talk would look at:

Her initial slides showed a selection of cases that had come to light through press reports. Basically, there is a lot of fraud out there! 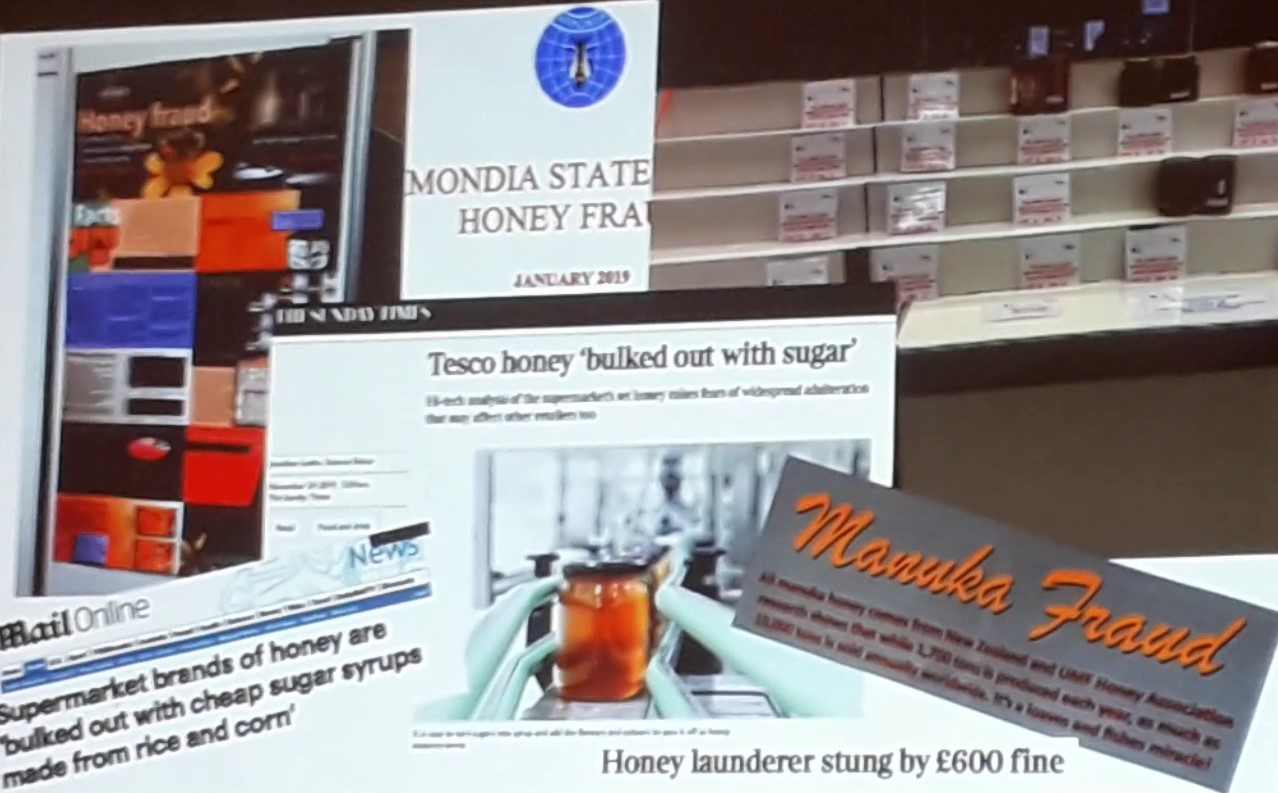 Trade in honey, like all other food substances, is regulated by National and International rules and regulations. Non-compliance could be due to accident or could be deliberate. The European Commission (2018) considers that four essential elements must be present in a case of food fraud. It must:

The definition of honey states:

Honey is the natural sweet substance produced by honey bees from the nectar of plants or from excretions of plant sucking insects on the living parts of plants, which the bees collect, transform by combining with specific substances of their own, deposit, dehydrate, store and leave in the honey comb to ripen and mature.
By this definition one third of honey in international trade has not been produced by bees, but from syrups in factories, making honey fraud the 3rd biggest food fraud worldwide after olive oil and milk. One telling statistic is that exports from Asian countries are growing more than the national hive count!

Consumers desire a natural, pure product, perhaps a desire to save bees (and the planet), perceived health benefits and so on. Coupled with a scarce and expensive-to-produce product this will produce strong profits via fraud.

At this point Lynne divulged some of the main types of honey adulteration used around the world.

In 2002 Chinese honey was detected with significant amounts of banned substances (chloramphenicol, an antibiotic used to treat bee diseases). Within a short time, there was a dramatic increase in honey exports from Vietnam and Singapore suddenly became the 4th biggest honey exporter in the world. Honey from Cyprus, Tanzania, Moldova, Romania, Argentina, Portugal, Spain, Bulgaria and Vietnam all tested positive for chloramphenicol! It’s all about money.

Modern chemical and physical treatments allow high precision dosing of enzymes and additives that mimic natural honey characteristics, and filtration allows alteration of the composition to disguise the nature of the original material. Add to this some analytical and detection methods may be obsolete and a lack of common public databases of authentic honey samples for comparison and it is easy to see that the criminals have the upper hand.

Generally the harvesting moves from south to north as the flowering period progresses. About 90% of immature honey is harvested on site and sold on the spot. This is artificially dried and filtered. Pollen may be removed or added to disguise country of origin. Syrups may be added to meet different market prices.

Ongoing surveillance of honey imports and domestic products revealed 13% of samples adulterated with corn syrup, rice syrup and cane sugar syrup. Large quantities of adulterated honey have been stopped from entering the country. All this has an impact on domestic beekeeping.

Honey consumption has doubled but honey production is 35% down. Imports are mostly from China. A new voluntary grading system for honey has been set up and there have been several convictions of importers and exporters for honey fraud.

In 2018 almost 50% of honey samples tested were found to be adulterated in some way.

Manuka honey statistics – 1700 tonnes per year produced in NZ, 10,000 tonnes sold worldwide. In China, 4 times more manuka honey is sold than imported, and in the UK, only 1 jar in 7 of imported manuka honey is genuine.

Samples have been found that were completely pure syrup.

77% of samples found to be adulterated, although the various tests gave inconsistent results, passing some samples and failing others.

Approximately 50% of imported honey comes from China. Several European countries are importing cheap honey from China and then re-exporting it as locally produced honey.

The UK imports 40,000 tons of honey at the lowest prices and there have been many incidences of honey adulteration. One survey bought 13 retail honey samples from supermarkets around the country and had them analysed by an accredited laboratory in Germany. The analyses showed that ALL samples were the product of this huge and harmful honey fraud.

Directly, fraud will destroy beekeepers’ livelihoods creating ‘The Endangered Beekeeper’. It is also bound to impact on consumer confidence as people realise they are being cheated. Some even claim there could be health risks.

What can we do about it?

Apimondia recommends the use of a multi-pronged approach strategy to combat honey fraud through:

Copa-Cogeca (the voice of European farmers and their cooperatives) recommend that honey imports into the EU must abide by Honey Regulations, there should be compulsory labelling of origin, full traceability and the EU should create a reference library of honeys for analytical comparison purposes.

Bringing together EU beekeepers using collective action to market, value and differentiate local honeys is felt to be a positive way forward.

The UK approach would be a harmonisation of validated analytical methods plus development of databases and biobanks of honeys, sugar syrups, bee feeds and pollen samples. There are many opportunities for beekeepers to ‘help themselves’ by getting together and promoting the quality and health benefits of their natural honey.

Our thanks to Lynne for making us aware of the scale of this international fraud. 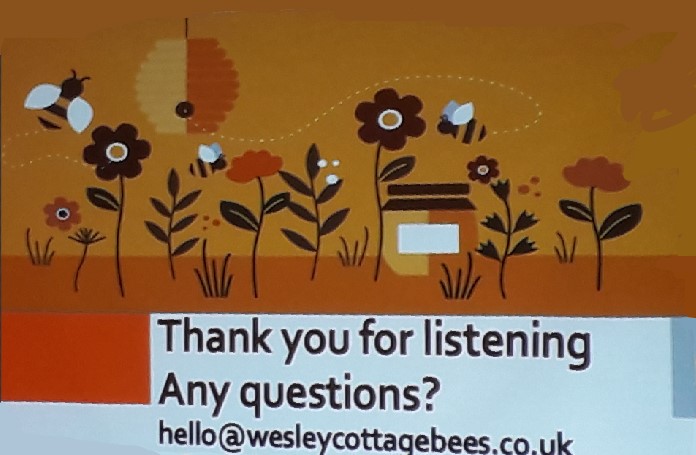