A talk by Leonardo Guber and Dan Field

Leo is Senior Ecologist with Highways England, based in Exeter. Dan recently retired from the same organisation specialising in land acquisition, highway law, and management training. Dan is a member of East Devon Beekeepers and it turns out that Leo has also kept bees in his youth and intends to take up the hobby again when he retires.

Roads and the Natural Environment

Leo stated that roads cut through virtually every terrestrial ecosystem in the world and have become a permanent part of the landscape. Understandably, roads have great ecological impact on the environment, often responsible for increased biodiversity loss around the world. Thus, road verges have attracted much attention as important areas of conservation and pollution mitigation.

The importance of road verges

Where main roads pass through farmed landscapes, the road verges may be the best quality habitat in the area, often with links to past landscapes, e.g. where old hedgerows border main roads. Verges tend to be relatively undisturbed and as will be shown later, verges can be of high aesthetic value.

As an example of his work, Leo described a fact-finding trip he made with colleagues along the A30 from Exeter to Bodmin, and back to Exeter via the A38. This 284km road length consisted of 450ha of grassland and heathland habitat. Even though this represents only 0.002% of the area of Great Britain they found over 330 grassland and heathland plant species. This is nearly a quarter of the official number of native species in the British Isles!

The soft side of Highways England’s estate

The term ‘soft estate’ is used by road authorities to describe natural habitats adjacent to motorways and trunk roads. This amounts to 178,000ha in the UK, of which 30,000ha are in England, this region being managed by Highways England. The importance of road verges has gradually been going up on the agendas of both management and ecology since the 1960s, so what is the present-day situation?

Working with soft estate: what is out there?

To find out what is out there Leo uses a variety of techniques.

The information gathered by these techniques is essential for producing the ‘Tools for Roadside Management’. In the Southwest Region, Highways England have been implementing a Grassland Management Programme (GMP) across the road network in Devon and Cornwall since 2002. This is currently being updated to cover the whole of the Southwest Region. The programme identifies aesthetic and species-rich grasslands within the soft estate that will require special management, and translates this into management instructions.
So, for example, a detailed map of the area to be maintained will be annotated with comments such as “Control Traveller’s joy, buddleia, sea buckthorn and winter heliotrope in advance of cutting and raking plot. Remove all self-setters and treat stumps”, or “Cut and rake. Remove gorse and self-setters to top of bank”.
All this detailed grassland management has to be tied in with the appropriate time of year taking into account access, gradients, possible traffic restrictions and treatment of sensitive sites.

The Importance of road verges

The importance of road verges can be seen in a 2014 study by Plymouth University. Their surveys showed that bumblebee abundance in verges was more than twice that of field margins. Also, that species richness and abundance of flowers used by bumblebees was higher on roadside verges.

Recently, a Highways England Pollinator Study has been carried out in the southwest with the assistance of Buglife. This ties in with the National Pollinator Strategy as well as their own Biodiversity Plan. 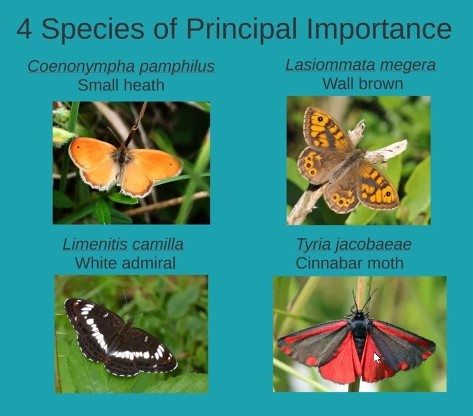 The department have a simple method of species rich grassland creation. It uses the ‘whole crop’ or ‘green hay’ method whereby seed material from existing species-rich roadside verges are harvested and introduced at cleared, prepared sites where scrub and self-seeded trees had taken over the verges. The ‘before’ and ‘after’ pictures show the effectiveness of this method and comments in the press! 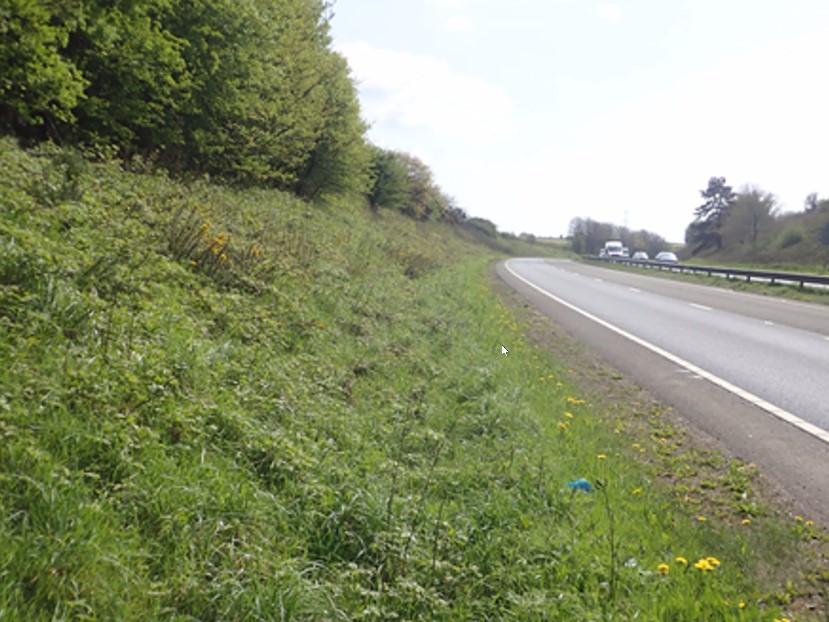 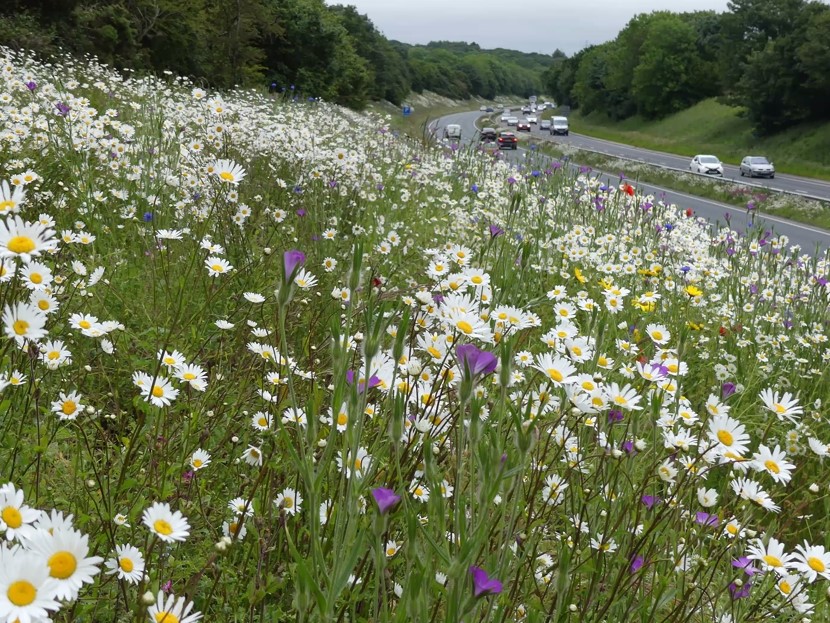 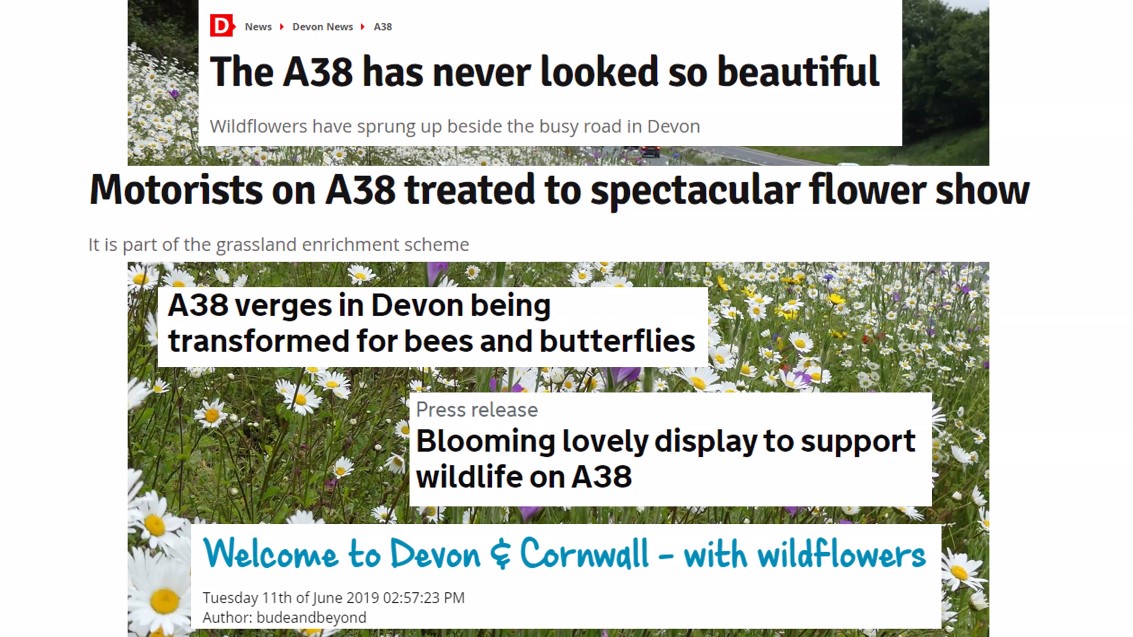 This is a Highways England led project, in partnership with Natural England and Eden Project, aimed at creating biodiverse habitat along the A30 in Cornwall.

The Moor is one of the main breeding sites in England for the rare Marsh Fritillary butterfly. The long-term survival of the Marsh Fritillary is dependent on maintaining a suitable habitat. The best sites are open, unimproved, lightly-grazed grasslands with abundant patches of Devil’s-bit Scabious, the caterpillar’s only foodplant. Eden Project raised 10,000 plugs of Devil’s-bit Scabious which were successfully planted on Goss Moor.

Other projects have been initiated with the aim of boosting habitat connectivity. Around 10,000 native trees and scrubs have recently been planted as hedgerows along trunk roads to enhance connectivity and provide habitat for birds, mammals and insects in Devon and Cornwall.
Leo gave a link to the Plantlife website where you can download the booklet ‘Managing grassland road verges’, a best practice guide. He also referred us to the People’s Trust for Endangered Species which has top tips and much other information on hedgerow management. 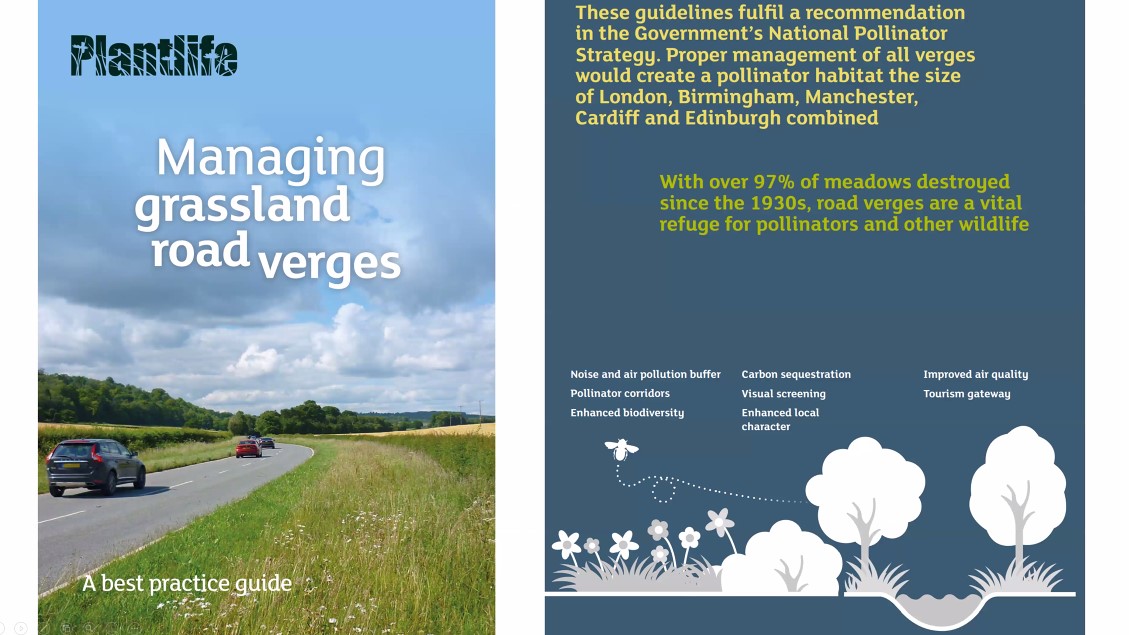 Thanks to both Leo and Dan for showing us ‘behind the scenes’ in their work place, and thanks once again to Mary for orchestrating the meeting.

HERE is the link to view the talk on YouTube.