Home » Get Started » Which Hive? » Commercial

The Commercial hive is a single walled hive designed to provide a brood chamber big enough for a prolific colony without additional brood or honey storage space. Frames are 16” x 10” Hoffman spaced in the brood chamber and 16” x 6” in the supers.
Brood boxes hold 12 frames and are usually constructed with bottom bee space.

Commercial frames have short lugs (5/8”) in order to allow the hive parts to be square. Compare 1½” lugs for the National.

The outside dimensions are only slightly larger than the National hive and it is possible to use National floorboards, crown boards, queen excluders and even supers with Commercial brood boxes.

It should be noted that the Commercial hive uses finger tip recesses cut into the side walls for lifting which may make moving heavy brood boxes difficult.

There is an eke called a Hamilton converter which will convert a National brood box into a 10 frame Commercial hive. 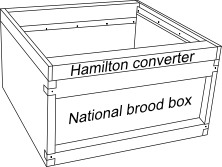 Bees force plants to flower early by cutting holes in their leaves
Hungry bumblebees can coax plants into flowering and making pollen up to a month earlier than usual by punching holes in their leaves.
Bees normally come out of hibernation in early spring to feast on the pollen of newly blooming flowers. However, they sometimes emerge too early and find that plants are still flowerless and devoid of pollen, which means the bees starve.
Read the article HERE.
Pesticide made from spider venom kills pests without harming bees
Funnel-web spiders have neurotoxins in their bite that can kill an adult human yet they might turn out to be our allies if the small hive beetle ever reaches the UK.
Scientists at the University of Durham and Fera Science think the spiders may provide the weapon we need to stop the beetles.
The spider venom contains a cocktail of ingredients and one of them – Hv1a – is toxic to most insects, including the small hive beetle, but does not seem to affect bees or humans.
Hv1a needs to be injected to be effective. Just swallowing the toxin is ineffective as it is degraded in their gut. To get round this the team have bound Hv1a to a molecule from the common snowdrop which effectively carries it through the gut barrier.
In the laboratory the team fed the “fusion protein” in a sugar solution to beetles and their larvae. Within a week, all the beetles and larvae were dead.
Next step was to put beetle eggs on bee comb with brood, and spray with the compound. The honeycomb and bees survived virtually untouched, but most of the new beetle larvae died.