Home » Get Started » Which Hive? » Smith

The Smith hive was designed by W. Smith of Innerleithen near Peebles, Scotland. The design concepts were simplicity, adequate brood area for local conditions and ease of transport to the heather.

The top bars of the National frames were reduced from 17” to 15½” and the resulting short lugs were let into a rebate cut into the thickness of the end wall. 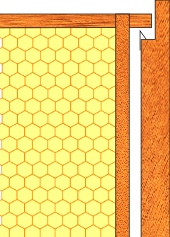 Smith Hive detail
Note the rebate cut into the thickness of the hive wall and the resulting short lugs. The original design was top bee space (as shown) but can be made bottom bee space if preferred.

The Smith hive is still popular today in the north of the country where the season is shorter, the weather cooler and the brood chamber sufficient for a normal colony. Further south the brood chamber may prove too small for a prolific colony so the beekeeper may expand the brood area using the same techniques as with the National, namely brood and a half, double brood or 14 x 12.

The single large size of 14×12 brood frames provides the bees with the opportunity to cluster and move upwards during the winter in a similar way to their natural behaviour. In brood and a half and double brood there are barriers to movement in the form of frame top bars, a gap for bee space and the bottom bars of the frame above. Colonies with brood may not bridge the gap or may move sideways.  Both situations can lead to isolation starvation.

It may take bees multiple generations to recover from being exposed to insecticides even just once, research shows.

Although studies have long shown the damaging effects of pesticides for the biodiverse environment, little is known about how much they affect insects in the long term.

‘No one knew they existed’: wild heirs of lost British honeybee found at Blenheim.

The ‘ecotype’, thought to have been wiped out by disease and invasive species, is thriving in the estate’s ancient woodlands.Read the article HERE