The Evolution of ‘doubled’ and ‘two-queen’ hives.

It is said there is nothing new in beekeeping!

In 1892 a Cottager beekeeper George Wells in Aylesford, Kent, announced a method of running pairs of closely placed single queen colonies under 14 to 20 frame queen excluders spanning both brood boxes. The bees from both colonies contributed to the honey stores and these ‘doubled’ hives outperformed the equivalent pairs of single queen hives so greatly that Wells wrote a pamphlet The Two Queen System of Beekeeping. A facsimile of the pamphlet can be found at the back of Alan Wade’s book, A History of Keeping and Managing Doubled and Two-Queen Hives, (Wade 2021). This article is largely based on a talk given to East Devon Beekeepers by Alan recently.

Multi-queen hive systems, where there are 2, 3, or more queens in the same hive, is a more complex situation than a single-queen hive. The laying pattern of the queens should synchronise but any departure from this ideal will lead to the colony reverting to a traditional single-queen hive situation. There are advantages in that multi-queen colonies, especially two-queen colonies, are almost swarm proof. In practice these large colonies will test the skill of the beekeeper, both during the setting up of multiple queens in the hive and during the management of the enormous numbers of bees.

A typical modern doubled hive setup can be seen in the illustrations below. 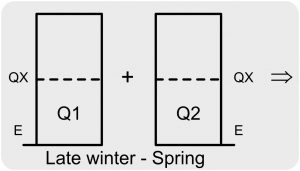 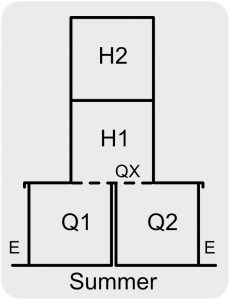 This requires a two-stage setup:

Method of inspection for Doubled hives

Each nuc roof may be removed in turn and the visible brood at the front inspected. After inspection these frames can be placed into a temporary box. Then the frames at the back of the brood box may be moved to the front and inspected. Replace the frames in the right order. Repeat for the other side. In this manner it is not necessary to dismantle the stack of supers.

After removing the supers at the end of the season the two brood boxes should be separated and treated as single-queen colonies again for overwintering. It goes without saying that this technique requires a brood box large enough to accommodate all the brood of a single queen.

There are many variations on this theme. You can read all about the history and development of doubled hives in Alan Wade’s book (Wade 2021). The following diagrams show some historic doubled hive overwintering setups. 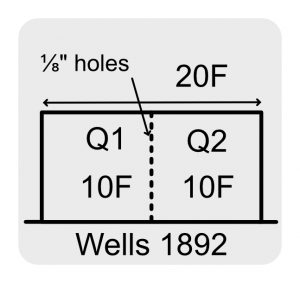 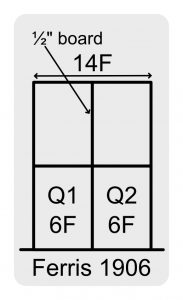 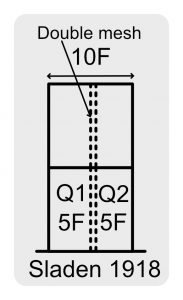 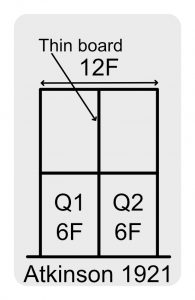 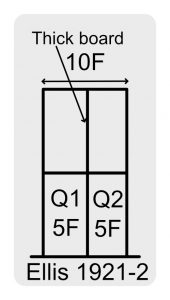 As with the doubled hives, these are established annually with: 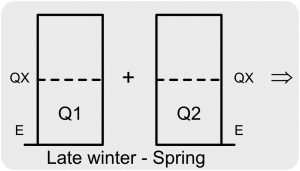 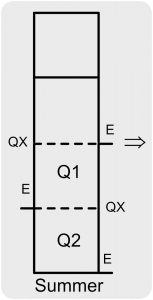 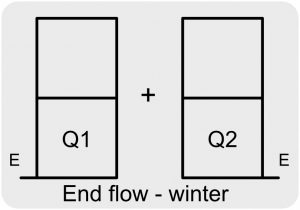 The diagrams above show one of the popular configurations of two-queen hive setups, but there are numerous variations. Where the two brood boxes are stacked on top of one another the configuration is referred to as a consolidated brood nest (CBN). Other variations include: 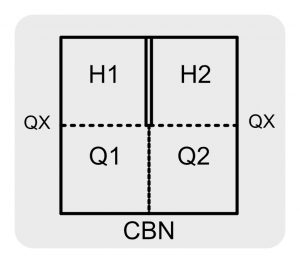 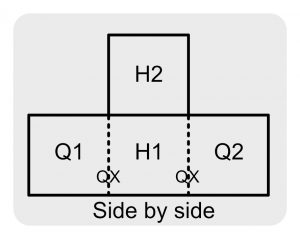 Before starting out to duplicate any of the illustrated setups the hobbyist beekeeper should pause to consider the pros and cons of the chosen system.

The modern doubled hive setup illustrated above is probably the safest system for the hobbyist beekeeper to start with. By overwintering two single-queen colonies abutted next to each other, the two colonies will get some benefit from each other’s warmth, tending to create the brood nest near the adjacent hive. However, they will not benefit from the effective sharing of queen pheromone as they would in a two-queen hive.

The two abutted hives provide a stable base for supering with full depth boxes over a central queen excluder. This facilitates easy honey removal whilst allowing brood inspection without having to dismantle the whole stack of supers.

Another option is to create a side-by-side two-queen colony in a long hive. See diagram below.

Two over-wintered colonies can be placed at either end of the long hive with the super frames in the centre section. Queen excluders are placed between brood and supers. Entrances are provided at either end and to the centre section. In hot climates the honey frames may be replaced by flow hive frames, but this option may not work so well in our unpredictable climate. After the honey flow the two colonies can be separated with a solid division board and over-wintered in the normal way.