Home » Get Started » Which Hive? » Dadant

Charles Dadant emigrated from France to America in 1863. He invented the original Dadant hive which accommodated 10 large frames.

The Modified Dadant (MD) was developed in 1917 from the original Dadant hive and consists of a larger brood box to accommodate 11 slightly smaller frames which are similar to those used in the Jumbo Langstroth hive.

This arrangement gives 93,500 brood cells, making the MD hive the largest standard hive in use in this country. The external dimensions of the brood chamber are 20” x 18½” x 11¾” high, and like the Langstroth, the MD is top bee space with the short lugged frames resting in a rebate cut into the thickness of the narrower sides. Note that the Dadant brood frames are at 1½” spacing (38mm).

Shallow frames are 6¼” high and a super will hold 11 Hoffman frames or 10 Manley frames.

Brother Adam at Buckfast Abbey in Devon designed the Buckfast Dadant hive in the 1920s. This consists of 12 standard Dadant frames in the brood chamber and is bottom bee space. The sloping roof design throws off rain water more efficiently than a flat roof but still maintains a flat surface for resting hive parts on (see diagram). When taken to the heather the hives are held together with a metal rod down the centre.
Four of these hives are placed in a square pattern with the entrances oriented north, east, south and west with the beekeeper working the hives from the centre of the square. 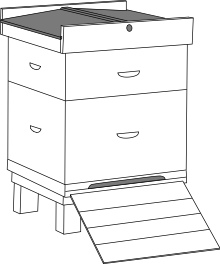 It may take bees multiple generations to recover from being exposed to insecticides even just once, research shows.

Although studies have long shown the damaging effects of pesticides for the biodiverse environment, little is known about how much they affect insects in the long term.

‘No one knew they existed’: wild heirs of lost British honeybee found at Blenheim.

The ‘ecotype’, thought to have been wiped out by disease and invasive species, is thriving in the estate’s ancient woodlands.Read the article HERE